UPDATE: Brian Albiston has published his results from the testing overnight from April 11-12.

Here’s a chart that shows what happened. 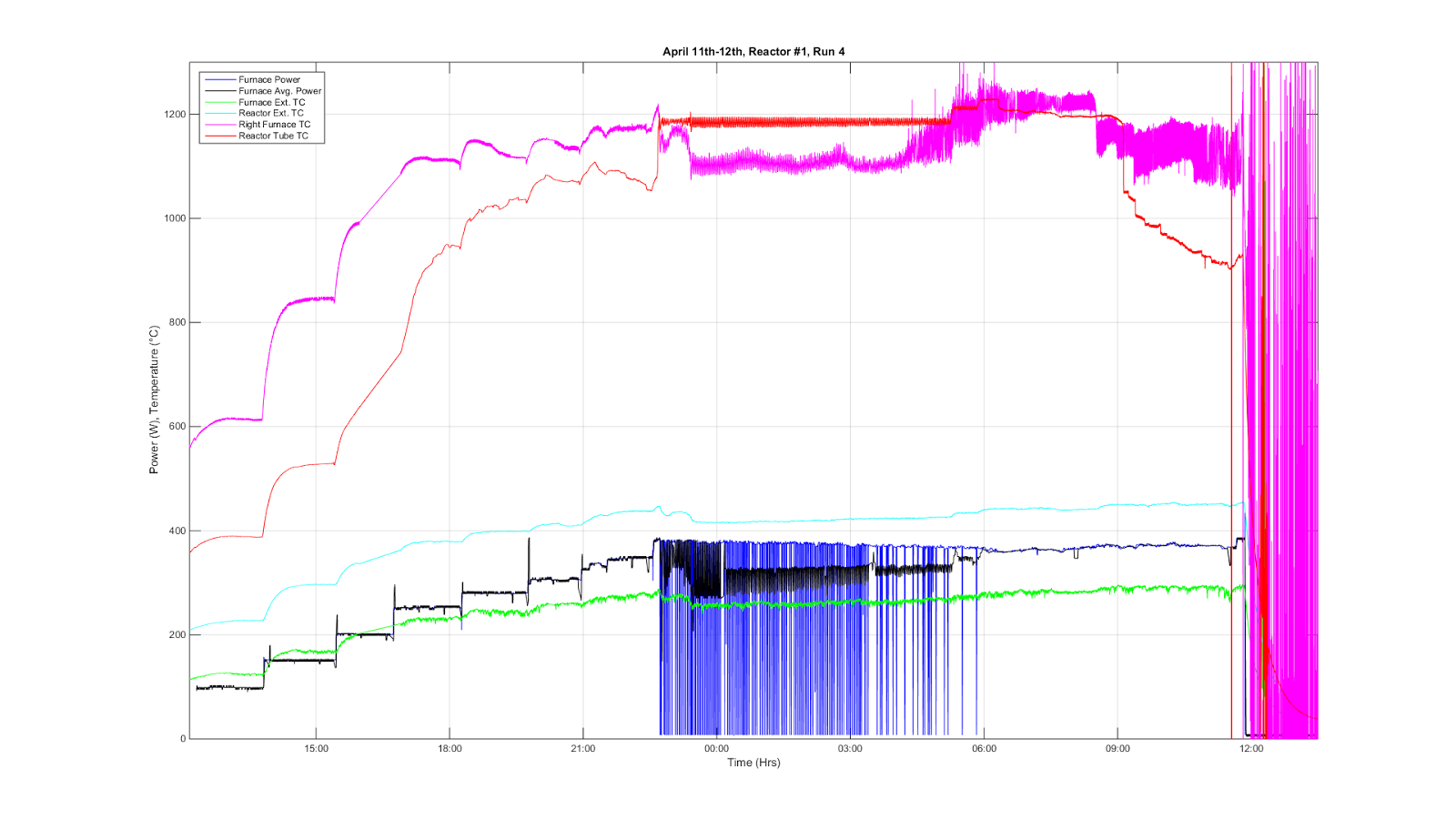 As you can see, at about 22:30, he pushed the power up a little, and the temperature took off vertically from about 1050 C until it hit 1200 C, where the PID controller kicked in and regulated the temperature so it would not go any higher. The blue line oscillating between about 400W and 0 shows the power turning on and off to maintain temperature. Something happened in the reactor at about 6:00 a.m. as the excess heat started to diminish and dropped off sharply at around 9:00 a.m. After realizing the excess heat was not going to come back, Brian tried to push the power to see what it would take to reach 1200 C but in doing so, killed his heater tube, and the thermocouple.

With the attention of the LENR world focused on the proceedings of the ICCF19 conference in Padua, there are some other things going on as well. Jack Cole reported on his LENR-Coldfusion site that he is putting together a new experimental system using induction heating, along with a new system of calorimetry. Jack says that from here on out he will be ignoring heat losses in his calculation and will be concentrating on measuring useful energy output. He writes:

I believe a more effective demonstration would be to ignore all heat loss. This is also a matter that pertains to commercializing the process. If you cannot effectively recover more energy in the form of heat than the electricity you use, then there can be no commercial application. For my purposes going forward, I will refer to Effective COP and Effective Energy Balance. It would be most significant to recover more heat energy in the water of the calorimeter than was applied to the heating system (ignoring losses), and this is my goal going forward.

Jack says he is getting set up for a new round of experimentation.

Another experiment to keep an eye on is the latest one by Brian Albiston. In a new post on his Fusion Test Log blog yesterday he explains his new experimental setup which employs a new power meter which also includes a temperature controller to prevent thermal runaway. He also has new thermocouple placements which he thinks will be more accurate, plus he has put some extra protection on his thermocouples to try to prevent them from burning out.

The experiment is currently running (started Sunday) and he says there should be new results to report on Monday Check out each of the websites for pictures.