Thanks to Obvious for posting this link in the Always Open thread, which is to a document titled “Operation and Maintenance Instructions for the E-Cat MW1 Energy Plant”. The document was submitted to the US Patent and Trademark Office by Andrea Rossi. The date of submission is May 2, 2015 — but the date of manufacture on the document is 2012 — so this is apparently documentation for an earlier design of the 1 MW plant. The illustrations show the interior looking quite different from the plant shown in recent pictures released by Andrea Rossi here. There is no mention of Industrial Heat in this document, so it may have been written before IH acquired E-Cat rights. 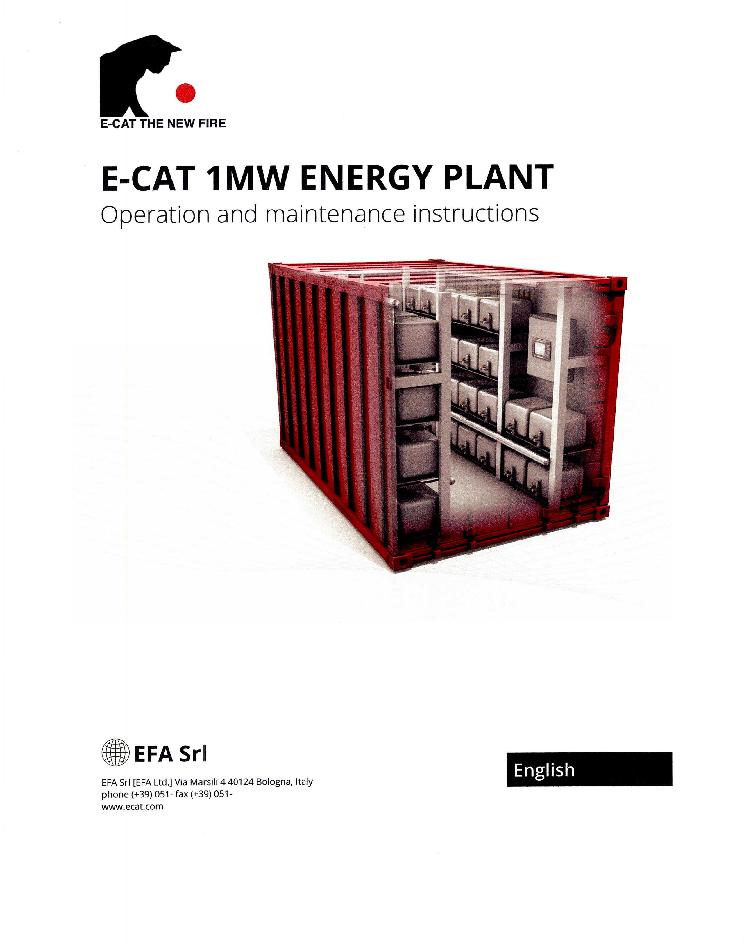 The plant described in the document is made up of “100 energy generator units connected in parallel” (p. 7), and it says that each “generator unit is made up of three E-Cat Modules” — so there would be a total of 300 E-Cat modules within the plant. In the plant a “primary cooling fluid carries off thermal energy output and is conveyed to a heat exchanger, thereby heating a secondary cooling fluid”

There are plenty of warnings in the document about not tampering with the plant, or doing any maintenance, modification or installation. All this work should be done by EFA-srl (A Rossi company) personnel. There is also a notice saying that only staff who are certified by EFA are permitted to operate the plant after it has been installed.

The instructions say that every six months the plant must be inspected by EFA-authorized personnel, and the charges must be changed by them.

This application seems to be in connection with the trademark of the cat and globe design, and the logo is included in the illustrations used within the document. I suppose that Rossi submitted the document to show that the logo is in use within documentation, and including these instructions to an old plant design probably minimizes the risk of releasing sensitive secrets.