I was in contact with Robert Godes today regarding a meeting he attended in Finland with an interesting group of people. Among those attending was Pekka Haavisto, minister of international development in Finland. I sent him an email and got a swift reply with some interesting names.

Hopefully I will be able to get some more information from those who arranged the meeting and perhaps also an interview.

One interesting thing about this is the debate in Finland regarding a new nuclear power plant. Perhaps they are looking at LENR as a potential alternative?

Robert Godes also has had a meeting with Statoil in Norway which is the state controlled oil company in Norway. Interesting Tweet-replies from Godes:

@Pawik it turns out oil companies have seen thermal excursions in their hydrogenation beds. It is a problem for them but LENR is the cause.

@Pawik all but the most pathological disbelievers change their tune after talking with me. Had a great meeting at Statoil in Norway as well. — Robert E. Godes (@regsoft) November 3, 2014

He refused to talk about where Brillouin were in the process when I had my talk with him via Skype. It is VERY interesting that the Finnish government AND Statoil chooses to talk with Brillouin though…

UPDATE: I received this note from a Finnish reader:

UPDATE 2: This photo was provided by a reader here. I think this is the meeting with the Finns, but can’t be sure. Robert Godes’ face is obscured by the gentleman with the white hair; sitting to Godes’ left is Robert George, also of Brillouin. 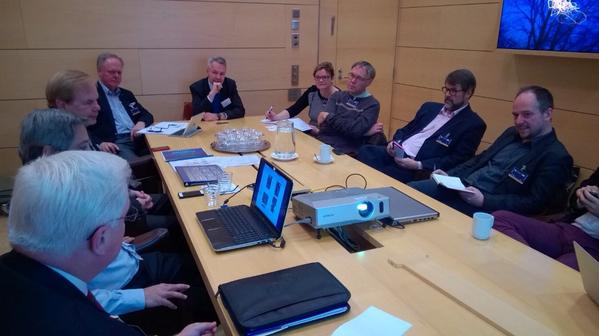 Thanks to a Finnish reader who points out that it looks like Pekka Haavisto is sitting at the head of the table: