For reference:
Week 1 thread
Week 2 thread
Week 3 thread
Week 4-5 thread
The Google document started by Ged which summarizes key information from testing so far .
The Spreadsheet with the terminal readings from the ocube
Spreadsheet with ECW testing data with the power pack from the ophone
The video posted by Steorn showing some of the inner workings of the Ocube

This weekend I found there was signs of life in the Ophone power pack which Steorn had sent me for testing. We had lost all readings from the terminals o3-o4 after the o1-o2 cells had drained down below 3.7 Volts, and I thought the unit was pretty much damaged beyond repair. So I decided to put a 5V DC power supply on o1-o2 with a 2.2 k Ohm resistor in series hopes of reviving it.

This meant that we could start measuring the of the orbo again, by putting resistors as a load across o3-o4 — but it did not take away the fact that the cell on o1-o2 was draining voltage, and I had been able to boost the voltage only by pumping significant amounts of energy into the cell (see the spreadsheet for various systems used) — and this defeats the purpose of what Orbo is supposed to do.

Then on Sunday March 13 I came up with a different approach. Steorn has said that Orbo cells recharge much better when exposed to high voltage fields, so I have decided to limit the current going into o1-o2 with a 1M Ohm resistor, and boost the voltage by combining 9 Volt batteries. So far, this approach seems to have had the desired effect of stopping the Voltage drain on o1-o2 (when there is no load on o3-o4). Again, see the spreadsheet for data.

I’ll try and minimize confusion about what I’m talking about with the following video.

I thought I’d follow the suggestion of seeing what might happen if you connected o1-2 to o3-4. Video below:

The following video shows what happens when you put a reference voltage on o3-o4 when the controller has not kicked in to provide a steady ~5.17 voltage:

Yesterday I (and other people who had ordered Orbo products) received the following email from Steorn:

Dear Customer,
First of all we would like to again thank you for your order and your interest in Orbo technology. We are contacting you to provide you with an update on the current situation with respect to product design, production and shipment.

As you may know we have been investigating a charging issue with the initial batch of products we shipped, specifically the charge controller board used and consequent under/over charging.

We believe that we have now developed a solution to the issues caused by the charge controller board failure. Testing is underway on the redesigned system, and assuming that the new approach meets our test parameters, we will then move on to the production stage of the process.

While we are eager to get your order to you as soon as possible, we have to establish that the work we have done to address the issues we encountered is capable of delivering the high-quality product you are entitled to expect.
As such, it is currently not possible to say exactly when your order will ship but please rest assured we are doing everything we can to minimise the delay.We will be in touch again shortly with further updates as work progresses.

Maybe some progress to report. If you check the spreadsheet (https://docs.google.com/spreadsheets/d/1UBIA4JTDb_kBwoytR9LP7OP7tH63yUeiPn2kKye4frY/edit#gid=0), you’ll see that there is a 100 Ohm resistor on o3-o4, with the goal of keeping that orbo cell drained. On o1-2 there’s a 100k Ohm resistor to see if we can get some energy out of o1-o2 without draining it. So far the voltage has been climbing even with the load on it. Let’s see how it progresses. Below is a video showing the setup.

Below is a discharge test done on the Orbo pack with a 220 Ohm resistor on o1-2.

Here’s a recharge test that follows on from the video above.

Today I did a discharge/recharge test on the o1-2 side of the Orbo pack. The data is in the spreadsheet, and Sanjeev kindly prepared these graphs. 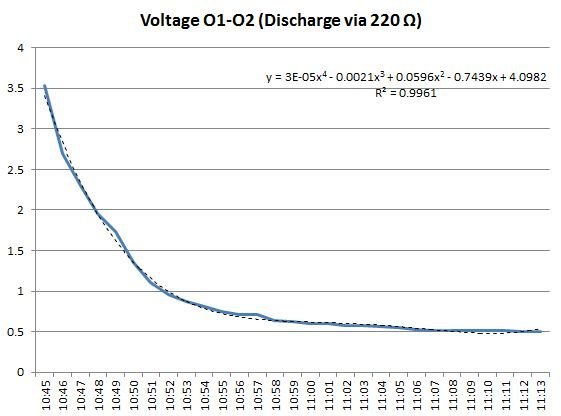