Ahlfors on the LENR forum just posted a very interesting paper on diamond etching with nickel powder that I thought you would definitely find interesting.

This is paper linked:

It could be interesting information in trying to put together together along with the Maccle formation and local EM/thermal environment what process are working together in creating these features. And if that can help paramatererise what is needed to stimulate and contain the transmutations you seem to be seeing.

This is an interesting paper, thanks for drawing it to my attention – especially considering the use of Nickel and Diamond.

Firstly, it is based on the immersion of the Diamonds in 12-52μm nickel powder, Nickel of course is not present in the powder form in LION. Having the nickel in this scale will allow sintering processes at 600ºC and lower perhaps – so the Nickel becomes mobile and catalytically active.

Secondly, whilst there are nano particles seen in the cavities, there is no suggestion that they are composed of anything other than Nickel, Carbon and oxygen.

We did not detect Boron in our diamonds, perhaps limitation of the analysis – however, the study does state that its diamonds contain Boron.

Further, there does not appear to be the abundance of ‘spheres’ forming on the surface of the diamond.

It could be that Nickel catalytically splits D2O releasing some O that forms some CO with the diamonds C and this in turn chemically transports some of the Ni via the Mond process that then deposits itself on the diamonds and nano nickel particulates subsequently leading to a similar process to that which is cited in this paper – however, this does not account for the other elements and ‘spheres’ found.

There does not appear to be any ‘molten nickel’ type structures (see attached image) https://uploads.disquscdn.com/images/622d40455203e0fdf3ef01cbd59cfefc025033e3b6ab6e9c75ec4d3a27d16dc5.png as shown in Fig. 2 (b1), which one might expect if this was the process, especially since no acid washing process was done in an attempt to remove metals. 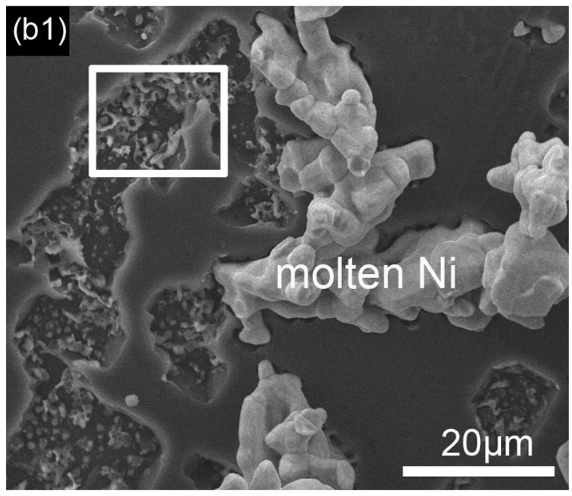 What is also interesting is that, of the diamonds that remain – they seam to have been wholly or in part, turned ‘black’ could this mean they have turned into graphite structure? Have the LION diamonds been fully converted to graphite? The process in the paper is a surface effect.

“In Nickel structure (Fig. 1S), the edge length of the equilateral triangle formed by the three adjacent atoms on (111) plane is 2.49 Å. While that of three atoms in diamond structure is 2.52 Å. Because their edge lengths are very close, Ni atoms on (111) plane can be vertically aligned with diamond atoms. As shown in Fig. 2S [18] , three Ni atoms are vertically aligned with diamond atom 1, 3, 5. With two unpaired d electrons, Ni atoms will attract electrons of diamond atom 1, 3, 5 and simultaneously compress atom 2, 4, 6. Then, diamond structure is convertedto hexagonal graphite structure with the inner triangle length is 2.46 Å”